Welcome to my LJ, friends, strangers, and all those in between. Since not all of my friends who read this want to bother creating a Livejournal account of their own, I allow anonymous comments to be posted. But please, sign your name or something on each comment to identify yourself; otherwise, the curiousity will drive me nuts!

Here's what you do: you take some dried hot peppers. Don't have any? Buy a couple at the store and stick them in the oven at 225 for a couple hours. Anyway, you take those dried hot peppers and put them in a coffee grinder and grind them nice and fine. Then you empty a packet of hot chocolate (Land o' Lakes makes good stuff. Who knew?) into a mug, and then add a pinch of the pepper powder. Unless you're me, then you add three pinches and a sprinkle, then forget and rub your eyes. Pour in hot water, stir, and drink.

1) It's fun. That's good news.
2) It's rough on the fingers and feet. That's not a surprise.
3) Nobody says anything if you run out of tunes to play and start repeating yourself. That's a relief.
4) Find the sweet spot! It turns out that being near lines of little girls is lucrative. That's alliterative.

At Spoutwood I found a spot that got a constant cool breeze, which was important because it was pretty sweltering. By happy chance it was also right next to the pony rides. As a result, I had a pretty constant audience of young children. Dancing kids = tipping parents! I also figured out halfway through that if somebody takes my picture, I could smile and nudge my tip basket, and they'd be very likely to drop some money in. The end result? While other strolling musicians complained about not getting much in tips, I kept very quiet.

The pony rides at Maryland Fairy Festival never had the lines that Spoutwood did, but I had the advantage of positioning myself between the food vendors (who were often handing people $1 bills) and the nearest shady area. Absolutely adorable? The little girl who sat down in front of me through three sets and just stared, smiling. Also adorable? The little girl who yelled "bravo!"; whenever I finished playing. 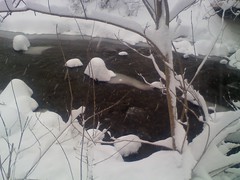 0206000937.jpg
Originally uploaded by aikinut
I'm fascinated by the underwater ice in the lee of the rocks.

"Making pie" is not a euphemism, but is much more fun than expected.

Boondock Saints!
Now that I've seen the sequel, I really want to watch the original. Plus my son hasn't seen it yet, and clearly this gap in his education needs to be filled. So if anybody wants to come by tomorrow around 6ish and enjoy it in HD on the 65-inch screen, you're more than welcome.

An ex of mine used to say that if you ask me what time it is, I'll tellyou how a watch works. My new supervisor appears to be the same way. Holy crap is that annoying!

The first monthly Sci-fi/Fantasy GeekTV night. This month, what better way to kick off the holiday season than with Death guiding a sleigh pulled by eight flying pigs?

I put 6:00 on the Facebook invitation. People are welcome to arrive earlier, and I'm not saying the show starts promptly at 6, but somewhere in there.

We'll be ordering out for dinner this time, probably pizza, maybe Chinese, so bring $5-10 for that.

I know this is short notice but there's a reason for it being this weekend that I'm not going to share here. If you can't make it, rest assured that there's always next month, which will probably involve Firefly. Or Buckaroo Banzai, depending on who wins the argument.

I didn't deliberately not invite anyone, so feel free to pass this invite along to anyone you want.

Folks coming from out of town are welcome to spend the night, but might want to bring a sleeping bag.

It turns out that I misunderstood slightly; the Owings Mills position wasn't a job offer, it was more of a "if they offered you this, would you be interested." I said yes, but now we need to set up a phone interview with their testing guy, and they don't appear to be in a hurry. Meanwhile, the Lebanon job wants me to start tomorrow. Just so we're clear, not working for them for two days this week means turning away close to $1000. That seems... unwise. I've looked over the consulting contract, and it's pretty simple; early termination of the contract at the agreement of both parties. So if the Owings Mills guys make an actual offer, and I decide I want to take it, I can just tell the Lebanon guys that it isn't working out.

But then, the guy who would be my supervisor in Lebanon says they'll all be wearing kilts in my honor, so I might like it there after all.

As of this morning, I've received two offers, neither of which thrill me very much.

Offer One: The Lebanon job, making $5-10K more than at my last job.
Why it doesn't thrill me much: First, because it's programming in the same language I've been doing for the last 10 years, and it's feeling more and more like a dead end. Second, because rather than a direct hire, their president wants to bring me on as a consultant for six months, which means *NO* benefits. Taking a day off would cost me hundreds of dollars. In six months, they'd hire me permanently. At least, that's what the guy I'd be working under says. I say, the president wants to wait until the first quarter numbers are in before deciding whether to keep me, and that makes me nervous. I don't want to be back in this boat again in April.

Offer Two: The Owings Mills job, making $0-5K less than I was making in my last job... doing Software Quality Assurance
Why it doesn't thrill me much: I'm okay with possibly making less than at the last job; I'd expected that with moving to Java. But moving over to QA has me nervous. The recruiter says the plan is for me to be able to move over into programming within a year or two, but that right now my Java experience is just too inadequate for them to take me on as a developer. I made enough of an impression on the interviewer as a smart guy that he wants me on the team, just in a different role.

I think I'll take the Owings Mills QA tester position, in the hopes that it will ultimately be better for my career. As long as I can get back into development within two years, I should be okay. Note that QA testing in this arena is almost paying as much as ten years of experience is getting me in my former career path. Even if I wind up staying in a QA career, I'd probably still top out higher than I would if I stayed with the old path.